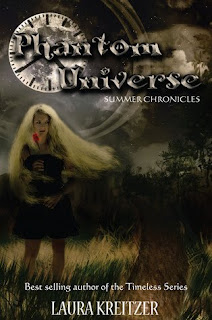 I’ve been hot on Laura Kreitzer’s tail since picking up her first book Shadow of The Sun last year and giving it 5 stars. This is the first ebook ARC I read in 2011 and what an awesome adventure it was!

Think of Hush by Donna Jo Napoli spliced with Inside Out by Maria Snyder and the Uglies Series by Scott Westerfeld. It’s a combination of pirate slavery tale meets time travel and poof 200 years into the dystopian future. The book starts out delving into the rather graphic past of a four year old sold into modern day slavery. Main heroine Summer’s back story is not easy to swallow and not recommended for children under age 16. That being said, I relished Summer’s present. Laura Kreitzer blows me away with her imagination with writing which is deep and rich, her characters multi-faceted.

Summer is not your average girl, but one suffering from PTSD which makes her mute, at times catatonic and riddled with severe anxiety. She communicates via taps and written notes with her best friend Landon aboard the Cosmos, slave ship on the seas of 2010. Twelve years pass in slavery until the crew is attacked by people from Summer’s mysterious childhood. Washed ashore on an island and launched into the future dazed and confused she meets main main number two, Gage. He is determined to win her trust and help her overcome the past, if they could just figure out what exactly that past means. Phantom Universe is a time travel adventure of a group of teens against all odds and a girl with unprecedented potential. It’s a series to watch because of the original premise and solid writing. 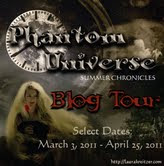 Thank you for joining Fire and Ice as the first stop on the Phantom Universe blog tour! Be sure to check out the rest of the schedule on Laura’s website.