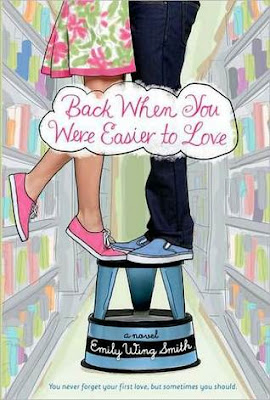 What’s worse than getting dumped? Not even knowing if you’ve been dumped. Joy got no goodbye, and certainly no explanation when Zan—the love of her life and the only good thing about stifling, backward Haven, Utah—unceremoniously and unexpectedly left for college a year early. Joy needs closure almost as much as she needs Zan, so she heads for California, and Zan, riding shotgun beside Zan’s former-best-friend Noah.

Original and insightful, quirky and crushing, Joy’s story is told in surprising and artfully shifting flashbacks between her life then and now. Exquisite craft and wry, relatable humor signal the arrival of Emily Wing Smith as a breakout talent.

I should mention if there is one thing I love first and foremost about this book it is the author. Emily Wing Smith is one of the most down to earth, kind and honest people you’ll ever encounter. She has overcome some major life obstacles plus has a master’s degree and two published YA novels. If you ever get the chance you’ll want to meet her. When she called to ask if she could swing by my home to deliver an ARC of Back When You Were Easier to love I was both delighted and touched. How many authors do you know that find you as a fan and bring you their book? Really!? Emily Wing Smith simply rocks.

Joy is your typical teen who is enamored and a bit obsessed with her first love…bordering on stalker status. Having only lived in Haven, Utah for six months she is attracted to Zan’s bookish nerdy allure. He knows the Dewey decimal system, can speak several funky foreign languages and wears his grandfather’s loafers. The two of them decide that Haven is just too conservative and happy for their style so they set their sites on Joy’s hometown colleges in Claremont, California. Things are plunking along quite nicely until Zan decides to get his GED and head to Cali without her. Leaving no number, no address and no plans for their future, Zan is gone and Joy wants closure. Here’s the plan…surprise road trip back to her roots and to find Zan. The only problem is all of Joy’s friends aren’t too hip on Zan or on the trip and there’s only one taker on the idea, Zan’s ex-best friend Noah.

Noah is the epitome of what Joy is trying to avoid. He’s a “soccer lovin’ kid” …as nice and popular as they come. He’s decided that Joy is going to be his friend whether she wants to be or not. How the two end up alone together in his Saab 900 heading from Utah to Cali we’re still not quite sure. But there’s plenty of Sprite and Barry Manilow tunes to keep the silence from getting too thick. Both Joy and Noah are in for the big surprise that awaits them on their UEA adventure.

Back When You Were Easier to Love explores the harsh reality of the loss of first time love, the dangers in setting up stereotypes and the struggles of those with the desire to live outside of cultural expectations. So much of it I could relate to in my experience moving between high schools and then colleges in Utah and California. Whether you are of Joy’s faith as a Mormon or not there is a huge amount of culture shock between these two states. Emily does a wonderful job of teaching that we are all just people, not above or below each other. My only hesitation in content is that a lot of the book is told from Joy and Zan’s viewpoint…looking down. In the process of the storytelling, the very stereotypes Mormons try to avoid may be reinforced in the minds of others reading about us for the first time. Emily differentiated between belief and culture beautifully in the chapter titled “This I Believe” on page 106-107. LOVE loved it.

Main character Joy learns she has lost so much of herself trying to be what Zan wants her to be. As teen I think we all made that mistake in one relationship or another. So though sad, Joy’s realization of self and the way she comes to it is realistic.

The last 1/3 of the book is definitely my favorite. Noah and Joy are on their way home and take a little detour through Las Vegas. It’s fun and such a hopeful way to end. Joy’s favorite sights in Las Vegas include the Pirate/ siren show at Treasure Island, the mini- Eiffel Tower at Paris and the Statue of Liberty at New York, New York. Noah’s are between TI and the Mirage and M&M world (pages 266-267)

So, our Photography Friday post below is a series of Vegas photos from Heather Gardner Photography. They will give you a little taste of the fun to be had in the last chapters of Back When You Were Easier To Love. We are giving away 5 photo postcards of prints from our galleries in honor of the Vegas chapters. Simply comment on the post naming your favorite photo to be entered. Giveaway ends April 25, 2011 and is open internationally.

A million thanks to author Emily Wing Smith for the sneak peek. Here’s her fab trailer just released yesterday on You Tube.

5 Responses to “Back When You Were Easier To Love”