Saturday February 12th we attended the Breathless Reads tour as it hit Salt Lake. Hosted by Kings English bookshop and held at the Salt Lake Library auditorium, it was HUGE! Authors on tour were:

Visit our Facebook page and watch the Breathless Reads video clips to find out what inspired their books, what the books above were originally titled and who are their favorite authors. 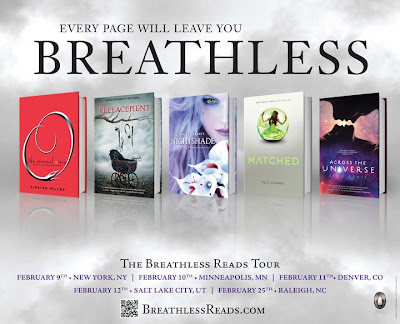 What an amazing group of authors and people all in one place! Breathless Reads may not have come near your city so here’s your chance to take a piece of the our home with you..

Comment below to be entered to win your very own Breathless Reads poster plus a signed copy of “Freshman for President” by Ally Condie. Contest ends March 18, 2011 and is open to US residents.