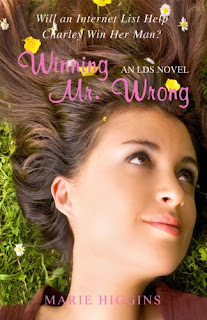 Tell us a little bit about your books published

Walnut Springs Press is my publisher. My first book was published in August ’10, titled Winning Mr. Wrong. It was recently nominated to win a Whitney Award for LDS authors.

Will an Internet list help Charley win her man? Whoever said the quest for love wasn’t comical, never met Charlene Randall. Charley is looking for a man who wants to start a family – a man who will take her to the temple. Problem is, she has never dated a man for longer than three months. When she reads an Internet article called “Ten Ways to Win Your Man” she decides to try it on her new coworker, Maxwell Harrington. Max was her crush in high school, but the superstar sports anchorman doesn’t even remember her. Damien Giovanni is Charley’s handsome neighbor who agrees to help her win Max over. What follows is a hilarious tale of mishaps and misunderstandings where Charley learns that what she really needs may be right in front of her.

Walnut Springs also published, Heart Of A Hero, a month after the first one was released. This book has also received many 5-star rating reviews and was the first out of the two to be nominated for a Whitney Award. 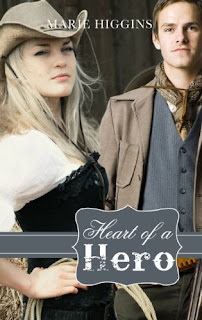 When Summer Bennett returns to Richfield after a five-year stint at her aunt’s finishing school, she discovers a lot has changed. Her father has suffered a crippling injury, and Summer is desperate to get the money to pay for surgery that could allow him to walk again. She hears of a reward offered for the capture of a cunning gang of bank robbers, and her years of etiquette training fall by the dusty roadside.

What Summer doesn’t count on in her quest to capture the bandits is the competition from her family’s longtime friend, Jesse Slade. Now a deputy marshal and local hero, Jesse keeps thwarting Summer’s plans, just like he did when she wore pigtails. She would like nothing more than to use Jesse’s head for a slingshot target, but soon Summer finds her aim shifting from his head to his heart. Problem is, Jesse is engaged to her sister Violet. Jesse doesn’t understand why he’s suddenly encouraging Summer’s attention and enjoying seeing the sparks fly every time they’re together.

What inspired you to want to become a writer? I fell in love with romance novels after reading Kathleen Woodiwiss’ stories for the first time. I also enjoyed watching movies that had a touch of romance. I don’t know if there was one person who inspired me, but everything just fell together. Between loving romance stories and having dreams like I’m watching a movie, these are what led to me daring to write my own story. That’s all it took because once I started writing, the ideas started coming so fast I almost couldn’t write fast enough. That was over 15 yrs ago and it’s the same now. Love it!

If you could live your life in a book which one would you choose and why? I thought I was doing that already since I’m always in another world when I’m thinking about my next story. hahaha But there is no one book I’d like to be in, but the story I’d chose MUST have romance. It MUST have adventure. And I MUST be a beautiful, slender, women with a fun personality. Why these? Because I love a good story / adventure…and I’ve always wanted to be slender and beautiful. J

Do you have a play list for your books, if not what songs do you think fit the plot?
I’ve never thought of songs for the plot, but definitely one of my favorite 80’s songs will work for Heart Of A Hero. It’s the song from the movie Footloose – Holding Out For A Hero.

I’d never thought of a song for Winning Mr. Wrong, but when my friend put my book video together, the song she chose for that fits perfect. Check out the video to see for yourself –

http://mariehiggins84302.blogspot.com/p/winning-mr-wrong.html Also on my blog you’ll have to watch the book video for the other book which is cute as well!

What has been your favorite character to write? I love strong heroines. Kick-butt heroines that don’t take any sass. I also enjoy writing charming heroes. I’ve enjoyed writing different kinds of characters. It seems they all go through changes as they progress through the story, and that is what makes it fun to write, I think. Sassy, funny heroines are probably my favorite, though.

Most inspiring quote? I have two that are hanging on my wall at work and by my computer desk at home:

“Success is a finished book, a stack of pages each of which is filled with words. If you reach that point, you have won a victory over yourself no less impressive than sailing single-handed around the world.” ~~ Tom Clancy

“Failure will never overtake you if your determination to succeed is strong enough.” ~~unknown

Favorite authors and books? I have too many to count. I love historical romance mainly, so if there is a LDS author who writes historical, chances are, they’re going to be one of my favorites.

If you could go on a retreat where would you pick and why? Sandy beaches sound fun…with a warm breeze blowing gently against my cheek. Then again, sitting by a fireplace with the fire warms my toes and fingers while snow is swirling around outside the secluded cabin in the mountains… Shoot, anywhere I’ve NEVER been would be a good retreat to get inspired to write my next novel.

Any other books in the works? Goals for future projects? You don’t know me well, do you. heehee I will ALWAYS have a book in the works. I actually have three releases scheduled for 2011. My first paranormal suspense (with romance, of course) will be released in February. Editor and I will start working on this any day now. Here is the blurb:

When a beautiful woman claiming to be a ghost from 1912 appears in Nick Marshal’s new office and begs for help in solving her murder, he’s intrigued enough to consider her plea. A scandal that rocked Hollywood almost destroyed his law practice; so taking on a client who insists he’s dead seems a good way to refresh his career – if only so he doesn’t think he’s going crazy. The more history he uncovers, the deeper he falls for the ghost.

Abigail Carlisle believes Nick is her heart’s true desire, but how can happily-ever-after happen when she’s already dead?

For the other two stories that will be released this year, we don’t know at this point which ones they will be. Will it be another romantic comedy like Winning Mr. Wrong? Or will it be a spin-off story from Heart Of A Hero? Who knows…

Another project I have going right now is trying to find an agent. Currently, I have two agents reading over my newest Christian historical romance – A Walk In Heaven. I would love to see something wonderful happen with this.

My goals? To write as much as I can with having a full time job – and to make people happy with my stories.

What resources would you recommend to other aspiring to write? For several years, I was part of an organization called Romance Writers of America. If you like to write romance, this is the place for you. If not, I would advice to find a writing group you can meet with once a month. It’s so important to know there are other writers out there struggling with the same issues. And we all need that kind of support.

Tell us your most rewarding experience since being published. I absolutely love it when people tell me how much they loved my stories. That feeling will never go away! But lately when I’m in stores, I’ve been getting that “Are you Marie Higgins – the writer?” question, and it tickles me pink!! My poor husband can’t go anywhere in town with me now without someone asking about my books or asking me if I’m that writer. FUN!! And last month when my daughter and I delivered Christmas goodie-plates to friends and people in my church, I had my daughter take the plates to the door, and she said most everyone told her how good of a writer her mother was.

Thank you so much to Marie Higgins for joining us and for this exclusive interview. We can’t wait to read her books! Hop on over to her blog for more information and book trailers.