Our interview today is with Dan Harrington author of Who’s At The Door published November 8, 2010 by Cedar Fort International.

Author Bio: When Dan Harrington was 8 years old, he tried to interview a talking Rudolph the Red-Nosed Reindeer at Santa’s Village in New Hampshire. With captivating questions such as “Exactly what Reindeer games do you play?” and “What’s Santa’s favorite cookie?” he drove a teenage employee crazy enough to say that Rudolph was sleepy and had to go to bed.

Harrington became a professional freelance writer many years later in 2007. His work has appeared in publications such as Village Soup, The Kennebec Journal, Inside Pro Wrestling/The Wrestler, Portland Magazine, and LDS Church News. He has written about everything from missionaries to extreme sports to law enforcement. He lives in central Maine.

What works/ articles have you written? Is this your first book published? 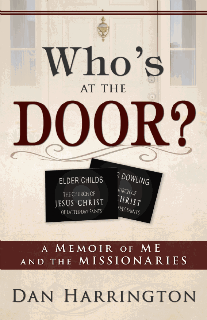 This is my first book, but I’ve had about 200 articles published. I had two in LDS Church News: one was about a patriarch and the other about a morning seminary. I’ve written feature stories for newspapers and magazines on a variety of topics like extreme sports, the military, and law enforcement.

I’ve also interviewed Victoria Rowell, the actress from The Young and the Restless; UFC Fighters Marcus “The Celtic Warrior” Davis and Tim “The Barbarian” Boetsch; Scotty 2 Hotty from the WWE and various other well-known people.

Any other projects under way?

I’m currently working on some stories for a newspaper and deciding what my next book should be about.

What moved you to want to write and publish your story?

I’ve always wanted to write a book, and my experience with the missionaries was on my mind a lot. It was a perfect fit. It was difficult to find books about the LDS Church that weren’t trying to convince me to think a certain way. I wanted to write a book for other investigators, so they would know that I’ve been where they are—a lot of people have. You just don’t hear about it unless a conversion is involved. In the book, I don’t try to convince people that the LDS Church is right or wrong. I just put my experience on the table and share my thoughts.

In what faith were you raised?

Catholic. The book includes some memories from catechism (Sunday School) that were both funny and serious. My upbringing gave me a real respect for Christ, but I never realized there were any other churches besides my own until I was much older. I thought everyone felt about God the same way I did.

I have several, but for now I’ll say:

One of my favorite books is “Pawn of Prophecy” by David Eddings mostly because it turned me on to reading.

Braveheart would be my favorite movie—awesome characters, action, romance, a villain you want to see crushed. That movie has it all.

Is there a message you hope to convey to your readers?

That you can care about people even if you disagree with them. I think opening your home and heart to a stranger has the potential to change your life.

I want people to see the missionaries as specific people. Most LDS books I’ve seen don’t treat the elders as characters, just vehicles to conversion.

Describe the road to getting published and what helped you the most.

I think my resume and research helped me the most. Before I looked for a book publisher, I had a hundred articles published in various newspapers and magazines. Looking for a publisher is like looking for any other job; they want to see your resume.

As a teenager, I used to have this grand notion that a publisher would discover me out of the blue. It doesn’t work that way. Editors, agents, even regular people always ask where you have been published. It’s best to have an answer.

I finished the book in December 2009, sent it to several publishers in January, and by the end of February 2010 I was offered a contract. I was floored. Part of me is still on the floor. You hear so much about slush pile limbo, but I think I was in the right place at the right time and with just enough experience to stand out.

What advice would you give to male authors?

Get published wherever you can. Create those bullet points for your resume. As a male author, you can sometimes feel like the odd person out at workshops where most of the attendees are women.

In Maine, I often found myself the only male under 65 at writing events.

What is the Man Cave group you started?

Man Cave Authors is a brand new blog I started with several other published male authors including Michael Young, David West, J Lloyd Morgan, and Frank Cole. I had noticed several group blogs online and most of them were hosted by women.

I had been corresponding with these guys, so I asked if they were interested in started a male author blog called “The Man Cave.” They all enjoyed the idea. We’re hoping to offer some writing advice from a male perspective.

Anything else you want to add?

I appreciate the interview. It’s exciting to have my first book published, and I appreciate the support. So far, I’ve gotten so many good reviews from Utah writers, and it’s wonderful to get such praise. I hope more people will enjoy the story.

Thanks to Dan for that exclusive interview! To learn more about him visit his site at http://www.authordanharrington.blogspot.com/ And add Who’s At The Door to your goodreads pile here: http://www.goodreads.com/book/show/9582821-who-s-at-the-door