Summary: Sixteen-year-old Yara Silva has always known that ghosts walk alongside the living. Her grandma, like the other females in her family, is a Waker, someone who can see and communicate with ghosts. Yara grew up watching her grandmother taunted and scorned for this unusual ability and doesn’t want that to be her future. She has been dreading the day when she too would see ghosts, and is relieved that the usually dominant Waker gene seems to have skipped her, letting her live a normal teenage life. However, all that changes for Yara on her first day at her elite boarding school when she discovers the gene was only lying dormant. She witnesses a dark mist attack Brent, a handsome fellow student, and rushes to his rescue. Her act of heroism draws the mist’s attention, and the dark spirit begins stalking her. Yara finds herself entrenched in a sixty-year-old curse that haunts the school, threatening not only her life, but the lives of her closest friends as well. Yara soon realizes that the past she was trying to put behind her isn’t going to go quietly. 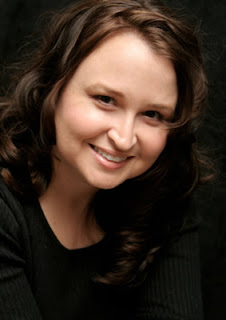 Lani Woodland has been an avid reader since elementary school when she first discovered the Babysitters Club and Sweet Valley Twins series. In sixth grade she began writing plays and recruiting (with force when necessary) her friends to act them out. Most of these early works were inspired by She-Ra, the epitome of girl power to her young self.

The best way to tell you about Intrinsical is to give you the jacket flap. I came up with the idea for Intrinsical, not the whole plot but the general idea for the book at the Queen Mary in Long Beach, CA. It’s an old cruise ship that is now a hotel/museum. While
taking the guided tour there the guide informed us the first class pool was rumored to be haunted. Standing on the second floor of the pool room looking down over the pool I totally believed it. It was an eerie room. It was cold and there was an unsettling feeling that crept
over me as we were there. That moment of feeling watched and creeped out is where the first idea for Intrinsical was formed.

What books have inspired you and who are your favorite authors?
Almost every book I’ve read has inspired me. I can usually find something in it I liked and take away with me. My list of favorite authors is huge and varied. I read a little bit of everything (mysteries, paranormal, fantasy, urban fantasy, romance, classics and historical) so I have authors in almost every category that I love.

How did you choose Brasil as the setting for your book?
I chose Brazil to be part of Yara’s heritage because my husband lived there for a while and loved it. I wanted her to have an interesting background and I could just picture her grandmother in the places my husband described, so I thought it would be cool to have Yara’s father be from Brazil.

What advice would you give to aspiring writers?
I think the best advice I can give is to never give up and to listen to the feedback you’re given. When I first started submitting Intrinsical it was radically different than the book that got published. At a writer’s conference I went to, the agent asked if I could get rid of one of my
three main characters. She thought he was too confusing. If I could, then she would be interested in reading more. I had no idea how I was going to do that but I said yes. Then I brainstormed with my friends and came up with a way to make that happen. The agent didn’t end up offering representation but her one suggestion was the catalyst for a major revision and helped improve the whole story. Also for Intrinsical there were many times when I was tempted to give up but kept working on it and submitting until it was picked up.

Have you taken any retreats or paranormal trips lately?
In the past, I visited the Queen Mary and the Whaley House in San Diego, both rumored to be haunted, but that was several years ago. Both were fun to visit and creepy!

What is a waker?
A Waker is someone who can see and communicate with ghosts. There are different levels of Wakerness. Some Wakers, really strong ones, develop other abilities, as well.

Any new books in the works and is there a sequel planned? I
I’m currently working on the next book in the Intrinsical series. I’m also working on another YA series and just submitted two stories to an anthology.

As a giveaway, author Lani Woodland has offered to write YOUR NAME into the sequel for Intrinsical. This contest is international and ends Decmber 15, 2010. Enter here for a chance at your name in print!

Tell us a little about Intrinsical. Where did the idea for the book
come from?