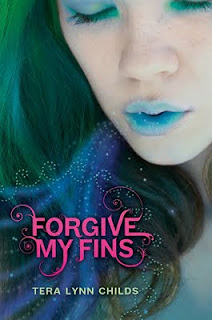 Lily Sanderson has a secret, and it’s not that she has a huge crush on swimming god Brody Bennett, who makes her heart beat flipper-fast. Unrequited love is hard enough when you’re a normal teenage girl, but when you’re half human, half mermaid like Lily, there’s no such thing as a simple crush.

Lily’s mermaid identity is a secret that can’t get out, since she’s not just any mermaid – she’s a Thalassinian princess. When Lily found out three years ago that her mother was actually a human, she finally realized why she didn’t feel quite at home in Thalassinia, and she’s been living on land and going to Seaview high school ever since, hoping to find where she truly belongs. Sure, land has its problems – like her obnoxious, biker boy neighbor Quince Fletcher – but it has that one major perk – Brody. The problem is, mermaids aren’t really the casual dating type – when they “bond,” it’s for life.

When Lily’s attempt to win Brody’s love leads to a tsunami-sized case of mistaken identity, she is in for a tidal wave of relationship drama, and she finds out, quick as a tailfin flick, that happily-ever-after never sails quite as smoothly as you planned.

A couple of months ago I got deep into a stack of YA books for review and one after the other was depressing. I asked my Twitter followers for suggestions of a light funny read to break it up. Forgive My Fins came highly recommended and I ordered it on Amazon. I’m a gigantic mermaid fan, so diving into the book head first was not difficult. This is the first book I’ve read by Tera Lynn Childs but it won’t be the last. Her conversations between characters was witty, hilarious, and splashtastic. The main character Lily is full of funny fish phrases like “beat the carp out of him” and “son of a swordfish” that had me giggling. Lily was kind of clueless but I still liked her and could relate. (I mean, really, how many of us never obsessed over some uber popular guy who was way out of our reach?) Then along comes Quince. Ah, Quince…the tough motorcycle boy who likes to tease. Underneath his rough exterior he has some pretty deep wisdom to impart about love.

I really enjoyed Lily’s relationship with her father, the King of The Sea. What little time they had together in Thalassinia, you could tell they respected and cared for one another. It’s so nice to see functional, loving family bonds in YA fiction. The concept of the Mermaid bond was such a fun twist. My only wish was that some of the side characters were more fully developed. Overall, Forgive My Fins was just delightful. A great gift for adults and teens looking for a quick and fun page turner. 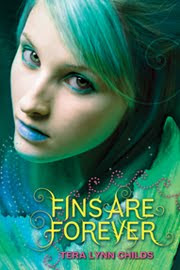 The epilogue hinted at a sequel and ta-da…book number two titled Fins Are Forever is coming out in June 2011. Woot Woot!!

And be sure to enter our two related Etsy shop giveaways below!

2 Responses to “Forgive My Fins by Tera Lynn Childs”