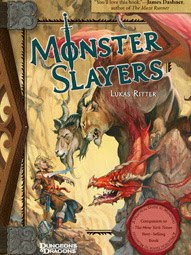 Monster Slayers
published May 11th 2010 by Mirrorstone (first published 2010)
details Hardcover, 256 pages
url http://jeffsampsonbooks.com/?p=125
isbn 0786954841
3 stars
For as long as Evin can remember, he has dreamed of being a real hero. And when his entire village is kidnapped by evil monsters, he finally gets his wish. With the help of his friend Jorick, a young elf wizard named Betilivatis, and an ancient guidebook of magical beasts called A Practical Guide to Monsters, Evin treks through ancient ruins and faces all kinds of strange and terrible creatures on his quest to find his family.

But soon, Evin realizes that not everything is as it seems. Why is Betilivatis sneaking off to report their every move to someone only she can see? Why can’t Evin remember anything before the day of the kidnapping? Why does it seem as if someone—or something—is controlling the monsters and drawing the three friends deeper into a battle they might never win?

A Companion Novel to The New York Times Best-Selling A Practical Guide to Monster
If you have a middle grade boy this is the series for you. Dungeons and Dragons fans can follow the adventures of two boys and an elfin wizard out to save their village. Along the way they encounter ruins, troll-like creatures, all sorts of monsters and men that are really machines. Can Evin and Jorick battle the seen and unseen forces that work against them to save their families? Who is Betilvatis speaking to and what is she really up to? Does magic win out over sheer force and the sword? Find out by reading the Monster Slayers!
We are currently touring Monster Slayers and Nocturne, both Dungeons and Dragons companion novels. Email us if you are interested in reading and reviewing either of them. 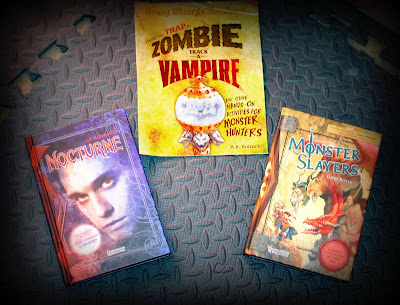 Comment below to enter to win this prize pack of Dungeons and Dragons Goodies which includes two hardback books and a Young Wizards Handbook. Contest ends August 6, 2010 Good Luck!

20 Responses to “Dungeons and Dragons Series”