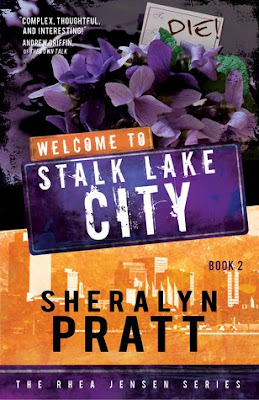 Synopsis from Back Cover “Deciding to go “off grid” for a while, Rhea Jensen can think of no better place to disappear than Utah. She settles into a quiet Mormon lifestyle-unless you count skydiving, race car driving, mountain climbing, and overly obsessive workouts. But when her best friends, Kay, tips her odd to a stalking case, Rhea takes the job out of shear boredom. Only then does she realize two things–first being good is hard; and second, she know way too much to get out of the PI game.

So, I have to admit that when I finished book one on the Rhea Jensen series I really couldn’t wait for the mailman to come with my sequel. I was out thrift shopping and lo and behold, stumbled across the old 2004 released book (which was well used by it’s previous owner.) This started the debate in my mind…”Should I? Should I not…?”

Give in to temptation, I did… I took it home and started reading, knowing full well the new book would be different. Luckily, I only got a few hours into it when ta da…just like magic, the fresh new package showed up. Have to say, it was worth reading both versions of the book, repeated plot and all. One just can’t get enough to Sheralyn Pratt’s characters!

In this installment, Rhea Jensen has relocated from her home of Los Angeles to Utah and has found a boyfriend Chad to keep her on the straight and narrow. She is convinced it’s time for a fresh start without her shady private investigator antics. Too bad her old friend Kay has a different idea. She’s bound and determined to show her the spicy side of life over the ordinary “tomato soup.” Rhea takes on a new case and the plot revs up a notch with her hot new next door neighbor Ty in the passenger seat. Buckle up for a fast paced ride, because book two does not disappoint! Sherlaynn Pratt pushes readers to think outside the box while remaining inspiring and fun at the same time. I have a new found love and am hoping book #3 is hot off the press and in my fingers soon. Here’s what other readers had to say about the books…

“Clever, witty, sassy… This fast-paced book will keep you reading into the night and leaving you craving for –Rachael Renee Anderson, author of Luck of the Draw

“Meaningful, fun and addictive! Once I pick up one of Pratt’s books, I can’t set it down. The Rhea Jensen novels have mystery, suspense and brilliant plots, with characters that are complicated and real.” –Cherie Call, singer/songwriter

To Enter To Win a Rhea Jensen Series postcard/bookmark: leave your name and email address in the comments below

+1 for commenting on our Sheralyn Pratt posts http://fireandicereads.com/2010/07/city-of-angels-by-sheralyn-pratt.html

+1 for becoming a fan of Sherlyn on Goodreads http://www.goodreads.com/author/show/1182413.Sheralyn_Pratt

If you are interested in joining our book/ARC tour, email us at fireandice.heather@gmail.com to be added to our list of reviewers.