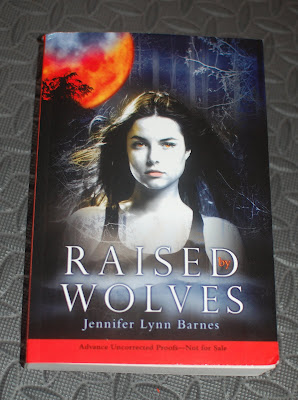 Synopsis From Goodreads…Adopted by the Alpha of a werewolf pack after a rogue wolf brutally killed her parents right before her eyes, fifteen-year-old Bryn knows only pack life, and the rigid social hierarchy that controls it. That doesn’t mean that she’s averse to breaking a rule or two.

But when her curiosity gets the better of her and she discovers Chase, a new teen locked in a cage in her guardian’s basement, and witnesses him turn into a wolf before her eyes, the horrific memories of her parents’ murders return. Bryn becomes obsessed with getting her questions answered, and Chase is the only one who can provide the information she needs.

But in her drive to find the truth, will Bryn push too far beyond the constraints of the pack, forcing her to leave behind her friends, her family, and the identity that she’s shaped

I just finished this book last night after three days of straight reading. It’s a long and in-depth look at one humans’ experience being raised as an orphaned teenager by an alpha and his pack of wolves. Bryn is a scrappy headstrong girl who is looking for answers after her parents were killed by “the big bad wolf” of her nightmares. Along comes Chase, a boy who shares her past and some secrets of his own. What is the pull that draws them together and why does he feel so familiar? She will risk her life and lifelong loyalties to find out. As the story unravels it is evident both Chase and Bryn, the whole pack as well as countless others are in danger. Can they stop the attacks before it is too late?
Raised by Wolves is a breath of fresh air to YA fiction and is psychologically interesting. I appreciate that it’s free from swearing and adult situations. I personally wanted to know more about Chase and “get inside” his head to hear his thoughts of Bryn. I kept waiting for the full story behind his past and more interaction between the two main protagonists. Pack supervision and alpha power keep them removed from each other for most of the book. The villain is truly creepy and Jennifer Lynn Barnes makes him the most real character of all. He truly made my skin crawl in the last chapters.
Come out come out wherever you are and pick up “Raised By Wolves” for a thrilling and suspenseful paranormal read. Four stars…
Email us if you are interersted in joining the ARC tour which kicks off today!