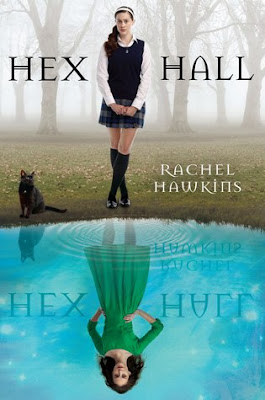 Synopsis from Goodreads…”Three years ago, Sophie Mercer discovered that she was a witch. It’s gotten her into a few scrapes. Her non-gifted mother has been as supportive as possible, consulting Sophie’s estranged father–an elusive European warlock–only when necessary. But when Sophie attracts too much human attention for a prom-night spell gone horribly wrong, it’s her dad who decides her punishment: exile to Hex Hall, an isolated reform school for wayward Prodigium, a.k.a. witches, faeries, and shapeshifters.

By the end of her first day among fellow freak-teens, Sophie has quite a scorecard: three powerful enemies who look like supermodels, a futile crush on a gorgeous warlock, a creepy tagalong ghost, and a new roommate who happens to be the most hated person and only vampire on campus. Worse, Sophie soon learns that a mysterious predator has been attacking students, and her only friend is the number-one suspect.

As a series of blood-curdling mysteries starts to converge, Sophie prepares for the biggest threat of all: an ancient secret society determined to destroy all Prodigium, especially her. “

Readers of Harry Potter will enjoy Hex Hall. Main character Sophie is sarcastic and snarky. Her roommate Jenna is a vampire and love interest a warlock. Add in three evil female witches, a ghost from her past along with Lord Byron… and you have Hecate Hall!
I bought this book after reading so many of LadyHawkins tweets on Twitter. She has that same sassy personality that shines in her debut YA novel. My favorite scenes were the hours spent bantering, fighting and spending suspension between Archer and Sophie. What a combination those two are. I love Archer, he’s a keeper. And I can’t wait for book two so we can learn more. It is a shocker of an ending! I gave “Hex Hall” 3.5 teetering towards four stars. There were references to jewelry in the book Of course, I was all over that! Enter the Jenna inspired bloodstone necklace giveaway below.