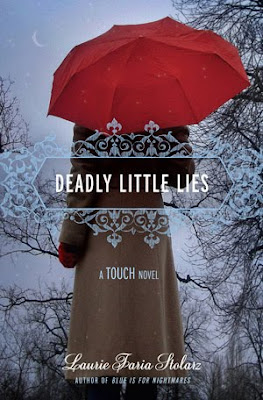 Last fall, sixteen-year-old Camelia fell for Ben, a new boy at school who had a very mysterious gift – psychometry, the ability to sense the future through touch. But just as Camelia and Ben’s romance began to heat up, he abruptly left town. Brokenhearted, Camelia has spent the last few months studying everything she can about psychometry and experiencing strange brushes with premonition. Camelia wonders if Ben’s abilities have somehow been transferred to her.

Ben returns to school, but he remains aloof, and Camelia can’t get close enough to share her secret with him. Camelia makes the painful decision to let him go and move on. Adam, the hot new guy at Knead, seems good for her in ways Ben wasn’t. But when Camelia and Adam start dating, a surprising love triangle results. A chilling sequence of events uncovers secrets from Ben’s past – and Adam’s. Someone is lying, and it’s up to Camelia to figure out who – before it’s too late.

As the second installment in the Touch series, this book will again have you checking the locks on your windows and wondering whats going to happen next. Once again Cameila is being stalked, only this time she has started seeing and hearing things of her own through her pottery adn she wonders if Ben’s power of psychometry has rubbed off on her. We see the same character flaws as we did int he first novel with Camelia being hesitant to tell her parents and trust Ben. And Ben…what can I say? He is one of my favorites of all time. He remains aloof and distant in this novel and I can;t wait to see how he develops in the next book. The tension between he and Camelia is still there and I couldn’t put the book down! I give it 4 stars and here’s hats off to another wonderful thriller romance by Laurie Stolarz.
Click here to find the playlist and Camelia’s page http://lauriestolarz.com/novels/the_touch_series.html