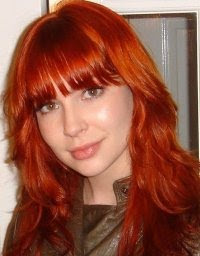 Anastasia Hopcus wrote her first book in the 2nd grade.It was entitled Frederick the Friendly French Ferret and was seven pages long. During high school she wrote numerous short stories and started (but never finished) three screenplays, all as an alternative to doing actual school work. At the very wise age of twelve her career ambition was to drive a Mack truck, but when that didn’t pan out, she tried acting, bartending, and being a receptionist in a dojo before finally returning to writing. Anastasia loves horror movies, Joss Whedon, obsessing over music, and British accents. She lives in Austin, Texas and her debut young adult novel is out Summer 2010 from Egmont. Taken from her website:

Still our clean slate has dirt underneath

obscured by layers upon layers of resurfaced fresh starts

Here is a little toddler of a teaser from Shadow Hills. No full chapters yet. I’d say this just meets the minimum requirements to qualify as a paragraph.

The campus lay before me, pristine and untouched by the terror I was experiencing tonight. The school had dorms filled with people who would hear me scream, which made it my best option. The quickest path was through the graveyard, so, already gasping for breath, I took off at a sprint, bearing down on the old cemetery.